Greetings, Lords around the world!
This is GM Isola.

-  A new system 'Summon', which is another way to recruit Heroes and a way to acquire Heroes’ exclusive weapon the ‘Relic’ will be added after the maintenance.

1. Requirement to use Summon
- Players must clear [Normal] stage 1-3 of the Nibelon Woodlands to enter the Summon system.
- When the entry requirement is fulfilled, the entrance of the Summon located on the bottom of the citadel will be unlocked.

2. How to Summon
1) Through the tabs located on the left side of the screen, the players can find the tabs of summoning that are currently available to proceed, and a tab to enter the mileage shop called ‘Linkshop’.

2) After selecting the summoning tab wished to proceed, the players can use  ‘Linkstone’ to summon Heroes & Relics within the designated summoning rate.

◈ What is ‘Linkstone’?
- An exclusive item used in the ‘Summon’ to summon Heroes and the Relics.

※ The summoning rate of each summons can be found by pressing the ‘Rate’ button.

3) The result of the summon will appear after the summoning effect. Also, through the ‘Summon History’ button, players can inquire summoning history of the last six months for a maximum of 200.

3. Summon Tutorial
- The Summon tutorial will automatically begin as soon as the players enter the system for the first time, and when the tutorial is over, the players will be able to proceed with the 10 summons of the designated summon for free. (Only once for each account)
- As a result of the free summon during the tutorial, players will definitely recruit a ★5 Hero.

※ ★5 Hero that can be recruited through the tutorial cannot be selected by the players, one out of the designated summon list of the Heroes will be recruited, depending on the summoning rate.
※ Please note that at the beginning of the tutorial, free 500 linkstones will be automatically added to the player's linkstone stack. These free linkstone will be used during the tutorial summon at the end. (added on Mar 3, 11:28 UTC+0)

4. Duplicate Results of the Summon
- Players can summon the same Heroes they have already recruited, but instead, they will receive 'Spiritus Gem' which will enhance the Hero's Aptitude, as well as 'Linktraces' which are exclusive items to the summon mileage shop.
- Players will instead receive 'Exp' of the summoned Relic, and 'Linktraces' when they summon the same Relics they already possess.
- Once summoned Heroes' Aptitude and Relic's Experience have reached the maximum, they will receive doubled Linktrace instead of the Spiritus Gem and Relic's Exp.

5. Linkshop
- The players will be able to use ‘Linktrace’ at the ‘Linkshop’ to trade with various items.

- A new exclusive weapon system for Heroes, ‘Relic’ will be added.
- Each Relic has a skill effect, which will be triggered based on various conditions when Heroes equip them.
- Relics can be obtained in various ways, such as ‘Summon’ or ‘Linkshop’.

※ Each Relic has a unique effect, and this effect can be enhanced when their tier rises.

1) Equipping the Relic
- Heroes’ Relic can be equipped through [Citadel > Heroes].

2) Enhancing the Relic
- Players will instead receive 'Exp' of the Relic, when they obtain the same Relics they already possess.
- Players can raise the tier of the Relic up to a maximum of 6, and when the Relic’s tier rise, Relic’s skill effect will be also enhanced.

- A new content that can enhance the Hero’s statistic, ‘Aptitude’ will be added.

1) Unlocking Aptitudes
- When players recruit the same Hero again, players will obtain a 'Spiritus Gem' which will enhance the Hero's Aptitude.

[Notice over recruiting the same Heroes]
※ Spiritus Gem can be obtained when players recruit a hero they already have, after the maintenance on March 3rd.

※ This only applies to [Earth] Mikhail, the hero that has been returned with 14-day Login Event after the maintenance on February 22nd: Players will not be able to get ‘Spiritus Gem’ from recruiting [Earth] Mikhail, even if players already recruited him, and as we noticed, 1K Crystal will be awarded for the 14-day Login event on the 14th date.

We sincerely ask everyone for understanding.

- Only 3 Aptitudes can be unlocked for each Hero. Players can select aptitudes in three different types, Offense / Defense / Support Aptitude.

※ Certain aptitudes can be unlocked after unlocking the previous level of aptitude.
※ All Heroes’ have the same aptitudes to select.

- ‘Contract Summon’, which will let players summon the 15 Heroes, who were only available through ‘Hero Contracts’, as well as their Relics, will be added.
- ‘Contract Summon’ is a ‘Selective Summons’, where three Heroes from the summoning list that are selected by the player will have a higher summoning rate than other Heroes.
※ Summoning rate of selected Heroes can be found through the ‘Rate%’ button.

※ Summoning Period can be subjected to change and will be noticed through further notice.
※ Contract Summons are categorized <Selective Summons> and are seperate from other types of Summons, thus their totals do not overlap or count toward each other.
※ Players can only obtain the Relics of recruitable Heroes of the Contract Summons.
※ If Players have not received a 5★ Hero within 89 summons, then players are guaranteed to receive a 5★ Hero on the series of summons that includes their 90th.
※ If Players received a 5★ Hero before their 90th summon, the accumulated number of summon will be reset to 0.

- 'Safe Mode' will be added to [Settings] in order to reduce the inconvenience of abnormal app closings due to insufficient memory.
- When the ‘Safe Mode’ is set active, memory optimization will be proceeded constantly and may cause the device's screen to pause for a moment. Please note that this happens due to memory optimization and it's not an abnormal situation.

- New Archives comments for following Heroes will be added.
* Comments for Heroes can be found at [Archives > Heroes]
- [F] Mei Ling  / [F] Lairei

- Rewards for Lord level-up will be changed due to an update of the Summon System.
- Crystal, which is one of the reward from the Lord Level-up Reward, will be changed to the ‘Linkstone’.

※ All players who already received the level-up rewards, ‘Linkstones’ will be applied retroactively depending on the players' Lord level, and will send the Linkstones through the [Mail].
Ex) If you have reached Lord lv 38 before the maintenance on March 3rd → 1,450 Linkstones will be sent through the Mail, which is a number of the Linkstones that you can obtained from lv 2 through lv 38.
※ As the retroactively applied ‘Linkstones’ will be sent through the Mail, any mail that players didn’t obtain within the deadline will be destroyed.
※ Retroactively applied ‘Linkstones’ will be available to receive through the Mail on their first login after the maintenance on March 3rd, until April 2nd 14:59 (UTC+0). Once players receive the mail, it’ll last up for 30 days in the mailbox, and will be destroyed after then.
※ Any Linkstones that players didn’t obtained from the Mail within designated date will not be recovered in any reason.

- Period : After Maintenance on Mar 3 ~ Until further notice
- Players will be able to earn double Linkstones for the very first purchase of each package.

※ The price is based on Google Play Store.
※ The contents are subject to resale or change after the termination of sales.
※ You can claim the items via the Shop tab in [Mail] upon purchasing.
※ If you are unable to claim the purchased item in Mail, please exit the game and try rebooting the app.

3) Changes in ‘Hero Booster Packs’
- The number of Energy included in ‘Booster Pack II’ will be changed. Please check the image below for details.

1. New options of the [Sort & Filter] menu will be added
- A New Sort option, ‘Bid Price’ will be added, which will let players sort the listed items with bidding price.
- New segmented filter options will be added to let players search for the items more easily.

1. Mystic Beast Hunt: Meowmic
- During the event period, Meowmic will appear in the World!

Please note:
- Find the detailed information about the Event in the in-game Event tab.
- During the hunt, Mystic Beast will occasionally appear in wave 2 of story and Primeval Hall stages you've completed.
- You must have already completed a stage for a mystic beast to appear!
- When you defeat a mystic beast, you will receive hunting medals that can be used at the special shop.
- You can use the collected medals for exchanging various items at the special shop.
- The mystic beast appears in random elements, and the obtainable amount of hunting medals varies by its elemental type.
- The mystic beast has different stats varied by the difficulty level of stories and Primeval Hall stages, but the obtainable amount of hunting medals is the same.
- The remaining hunting medals are automatically switched to 500 Gold per medal when the event ends.
- The obtained hunting medals can be used during the event period.

■ Other Adjustment and Bugfixes
- Linkstones will be added as one of the ad rewards, which will let players obtain linkstones at the Mystic Shop as well.

- The number of damages given by Monarch Skill to the Sea God at the Silent Strait will be adjusted for display.
- When a character with the ‘Blitz’ is provoked, ‘Blitz’ will be locked and cannot be used. A message that tells Blitz is unavailable will appear when the character trigger ‘Blitz’ while provoked.
- As ‘Blitz’ raises the burst gauge when its triggered on the Active Skills, the description about ‘Blitz’ at in-game [Help] will be changed as well.
- There will be improvement on the Heroes’ ‘Chain Burst’ effect.

- A total of more than 150 character voices of Alev (All Element) will be added in the next update.

March Avillon Times is here! Let's have a sneak peek of what will go on Lord of Heroes in March. 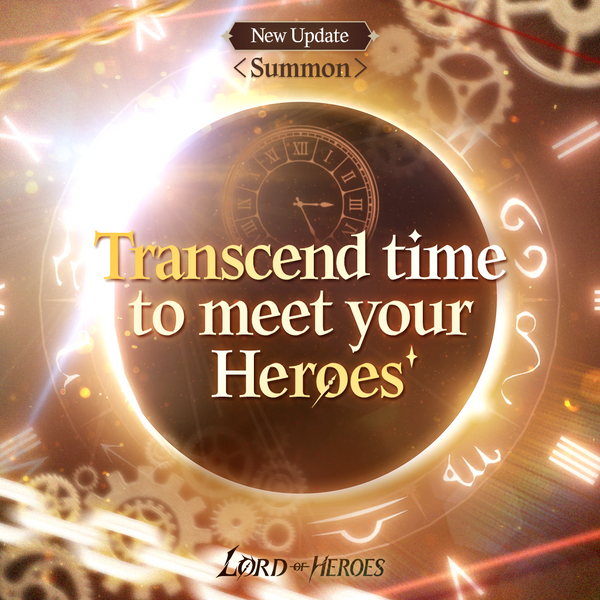