Mei Ling has long roamed the world while keeping watch on events as they unfold. Balance must always be maintained, and Mei Ling's calling is to ensure the scales never tip too much towards either order or chaos.

In all her travels, she has faced many perils, but her ability to discern others' karmic energy has proven to be of great utility. Speaking again of balance, there are times when those who've built up negative karma are necessary. Whenever encountering such individuals, Mei Ling's duty reminds her that she must keep the balance, but her conscience screams within her to stop them, leading to a never-ending conflict within her. Following her conscience would be no more than a self-indulgence and, if repeated enough, could lead to a disturbance in the balance...

The Great Spirit watched her silently, never giving her an answer, all while her inner conflict continued to grow.

Eventually, her journey took her to the depths of the woodlands, in which she met the people of Neto Doum and, following the flow of the balance, began to help with their reconstruction. While there, she met a small, reliable knight who was not afraid to stay true to his principles. He experienced the same kind of inner conflicts about his beliefs, but those conflicts never lasted long. Without hesitation, he did what he wanted and what he knew needed to be done. He was what Mei Ling had longed to be.

It was only then that the Great Spirit, watching her, smiled. 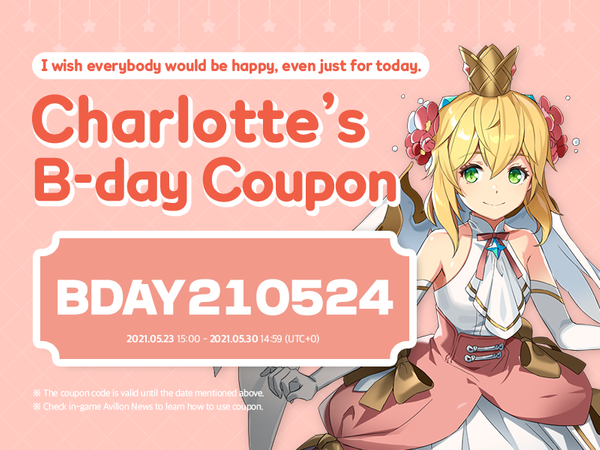 May 24th is Charlotte’s birthday!Let's celebrate his birthday and also download wonderful wallpapers!

Greetings, Lords around the world!This is GM Varhya. We introduce you to the update details for May 25th (Tue).